Sutherland Reflections: a project by Bronwyn Lace and Marcus Neustetter 2008 – 2015

Bringing in 2009’s International year of Astronomy together with the South African Astronomical Observatory in Sutherland, artists Bronwyn Lace and Marcus Neustetter launched their project of 6 years of annual engagements with the community resulting in permanent land-art, kite-flying spectacles, museum displays, memorial sites and most recently the creation of a full feature film and book together with the Africa meets Africa project. Sutherland Reflections aims to create a community driven experience for participation, artistic interventions and creative spectacle. The artists and scientists’ intention is to address the current attitude and relationship between the seeming “distance” of the disadvantaged communities in Sutherland and the international neighboring telescopic observatory.

Sutherland is a magnificent and unique place in the world. The small town sits in the middle of South Africa’s Karoo desert. Like so much of the Karoo it is known for its nothingness. Its qualities of darkness and silence cannot be easily found elsewhere. Its vast stretches of untouched land and crystal skies allow for an observation and contemplation unknown to the artists before the project. These were the same qualities that attracted astrophysicists to the space some decades ago, as a result just 7km from the town lies the Southern African Astronomical Observatory (SAAO), boasting amongst many others the Southern African Large Telescope, one of the most powerful telescopes in the world. Despite its beauty and its proximity to such a large international scientific project the community of Sutherland, numbering just over 4000 people, face the other side of isolation; unemployment and alcoholism plague large portions of this divided community.

South Africans relationship to their land has long been a contested one. In 1913 the Natives Land Act was passed. The repercussions of this act are strongly felt on a daily basis by the majority of South Africans. It was the first major piece of segregation legislation passed by the Union Parliament. The act decreed that natives could own only certain areas of the country. These areas initially totaled less than 10% of the entire landmass of the Union. From 1960 to 1983, the apartheid government forcibly moved 3.5 million black South Africans in one of the largest mass removals of people in modern history. Sutherland, as tiny and remote as it is, saw its own forced removals, to this day the event and its repercussions have not been publically acknowledged for or by the people of Sutherland.The majority of people living in Sutherland are Coloured, the term Coloureds (also known as Bruinmense, Kleurlinge or Bruine Afrikaners in Afrikaans) is an ethnic label for people of mixed ethnic origin who possess ancestry from Europe, Asia, and various Khoisan and Bantu tribes of Southern Africa. Many of the people of Sutherland are of hunter-gatherer/herder decent, also referred to as the San or Bushman. It is documented that in 1936 the South African government issued its last permit to hunt San. Nomadic life became impossible and people were forced to settle and often work for colonial farmers, in many cases people were ‘paid’ using the Dop System, the Afrikaans word ‘dop’ meaning an alcoholic drink. Farm workers would receive payment in the form of a daily measure of cheap wine. This served the farmer in two ways: He could use low-quality, surplus wine that had little commercial value to pay the workers, and it resulted in workers being held captive not by physical force but by the restraint of addiction. This practice increased and exacerbated alcoholism among farm workers, which resulted in widespread social damage among communities, particularly the coloured communities. As a result there is a high rate of Foetal Alcohol Syndrome in children born today in Sutherland and across the Karoo.

This combination of segregating acts, wars of resistance and violence as well as addiction and abuse has resulted in a distortion of identity. The Coloured people of Sutherland speak Afrikaans, many are devout members of the Dutch Reformed Church and some carry the surnames of the farmers their forefathers and mothers worked for.

The first is the Sutherland Dome on the property of SAAO. SAAO’s position in the Karoo requires that a level of darkness of silence be maintained in its surrounds. While this is magnificent for the pursuit of science the social and economic ramifications for an already disempowered community could be devastating. For a people whose connection to the land is layered with pain and violence, this international scientific territory does not necessarily feel welcoming.

In an attempt to open up dialogue towards ownership and accessibility artists Lace and Neustetter invited some of the community elders and leaders break ground for their own observation space and community dome. The ground breaking was done without permission and as a first symbolic gesture. Two years later and after much persuasion we acquired permission from SAAO and funding from the National Arts Council to build a naked-eye dome for the people of Sutherland. The base of the dome uses local historical building methods and rocks from the land. The geodesic dome references the neighboring scientific tools but also allows a person, lying on the ground and sheltered within the space to plot the movement of the stars with a grid. 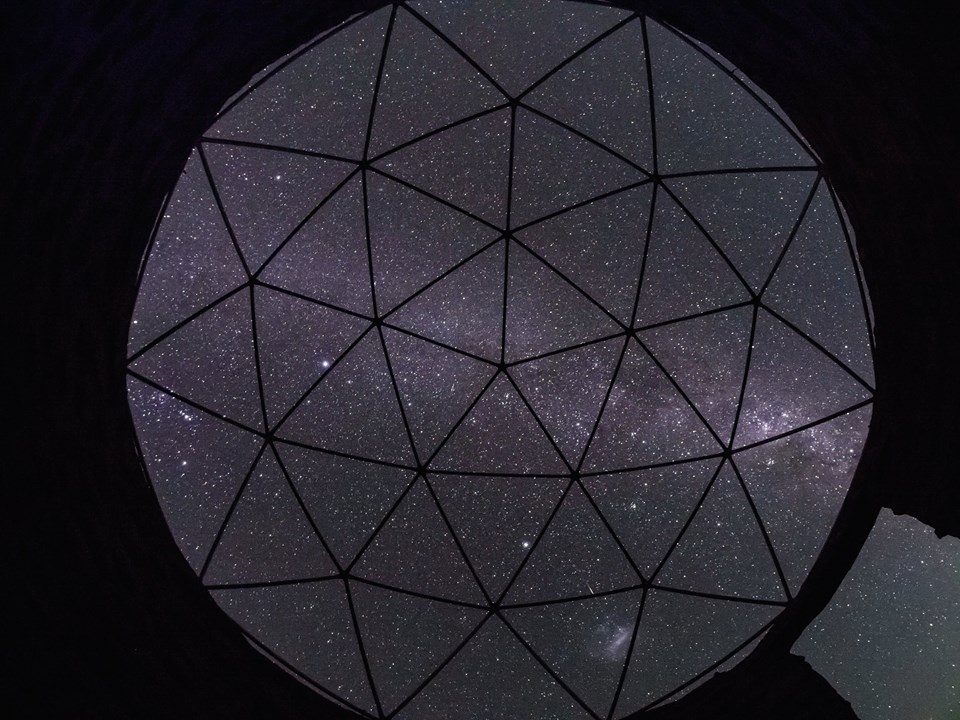 Another intervention is an installation in the visitor center at SAAO. Using collected broken glass and crockery left on the ground since the 1961 Forced Removal the artists created a 3D night sky. Drawn and written on to the walls along side the installation the the story of the removals as well as an old folk tale from the area involivng finding shooting stars and throwing them back to keep the night sky beautiful. 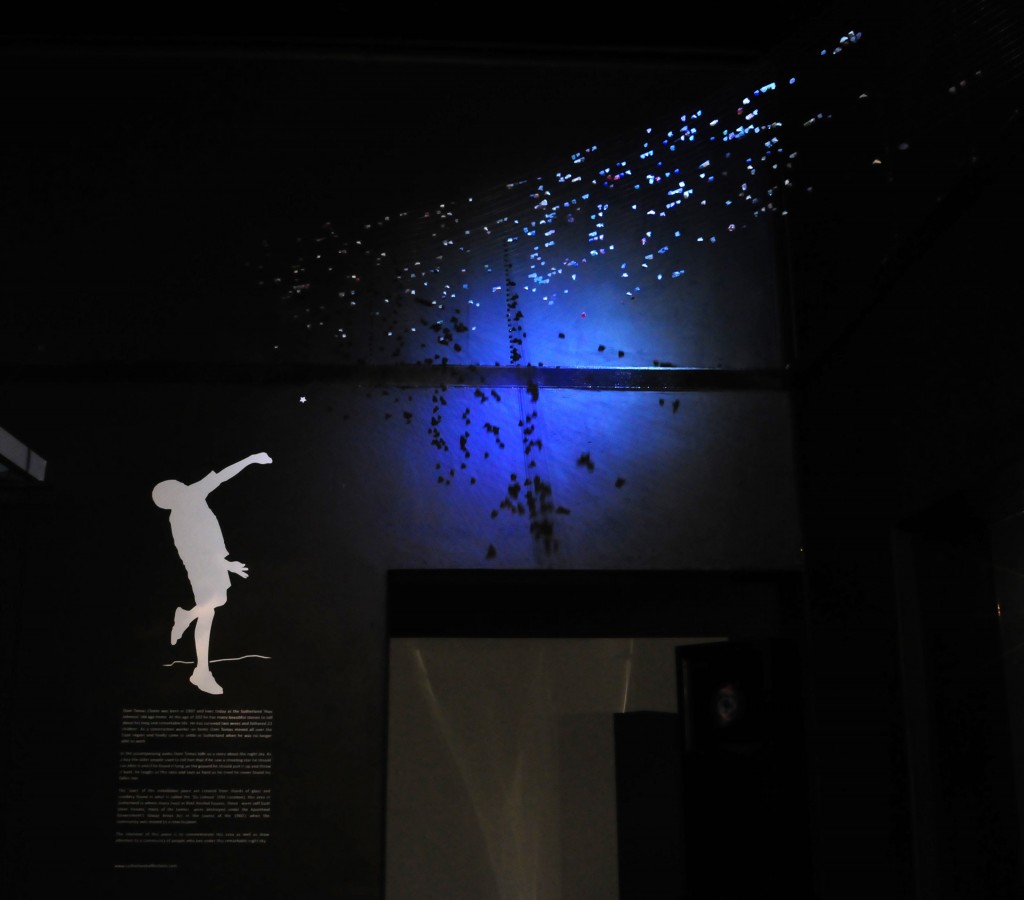 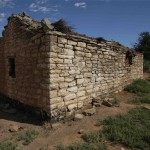 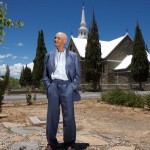 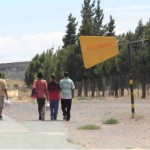 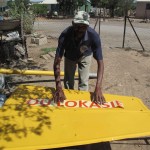 Africa meets Africa | My Room at Centre of the Universe